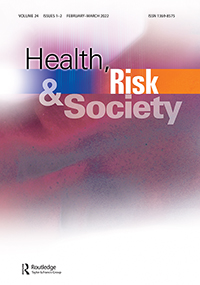 Understandings of risk permeate end-of-life (EOL) care contexts. In addition to the risk of bodily death, patients, family and healthcare providers face spiritual and communication risks during EOL care. The Western biomedical healthcare model is an objectivist, curative framework focusing on fixing the body; this cultural notion limits communication regarding physical illness. Existing work argues that Americans’ reticence to discuss EOL can be considered a public health issue, due to high financial and relational costs, lack of education about treatment options, and avoidance of EOL discussions until decisions must be made during health crises. The current study applied risk orders theory in analysing chaplains’ experiences of EOL care in the US, where medical practice is dominated by biomedical health models. Risk orders theory is used to examine risk discourses from a social constructionist perspective in response to dominant objectivist approaches to risk. The current study expands conceptions of third-order risks through exploration of the chaplaincy profession. Analysis of chaplain qualitative interviews and focus groups, totalling 48 participants across the US, suggest chaplains possess the potential to reframe cultural discourses about death and reinvigorate cultural imagination surrounding EOL care.

This website uses cookies to improve your experience while you navigate through the website. Out of these, the cookies that are categorized as necessary are stored on your browser as they are essential for the working of basic functionalities of the website. We also use third-party cookies that help us analyze and understand how you use this website. These cookies will be stored in your browser only with your consent. You also have the option to opt-out of these cookies. But opting out of some of these cookies may affect your browsing experience.
Necessary Always Enabled
Necessary cookies are absolutely essential for the website to function properly. These cookies ensure basic functionalities and security features of the website, anonymously.
Functional
Functional cookies help to perform certain functionalities like sharing the content of the website on social media platforms, collect feedbacks, and other third-party features.
Performance
Performance cookies are used to understand and analyze the key performance indexes of the website which helps in delivering a better user experience for the visitors.
Analytics
Analytical cookies are used to understand how visitors interact with the website. These cookies help provide information on metrics the number of visitors, bounce rate, traffic source, etc.
Advertisement
Advertisement cookies are used to provide visitors with relevant ads and marketing campaigns. These cookies track visitors across websites and collect information to provide customized ads.
Others
Other uncategorized cookies are those that are being analyzed and have not been classified into a category as yet.
SAVE & ACCEPT
Powered by